Going beyond the postcode

Postcodes were originally developed and adopted in the UK between 1959 and 1974. More recent approaches like What3Words and Google plus codes are trying to assign more accurate, meaningful geospatial locations. But what’s the implications for field service?

The origins of postcodes

Postcodes (originally postal codes) are alphanumeric in the UK and were originally developed and adopted nationally between 1959 and 1974. A full postcode (a “postcode unit”) designates an area with a number of addresses. They are used for many things in our daily lives – from insurance premiums to route planning to the lowest level of aggregation in the census.

With the combination of the postcode and the street number, an item can be delivered to an identifiable address. The problem is that many rural homes are still identified only by name. In some areas, one postcode can be shared by many properties so there is the opportunity for error resulting from busy couriers and delivery firms. Missing deliveries can happen as a result of poorly designed tracking and logistics.

Some companies such as eBay only confirm an item has been delivered to the postcode – without specifying the property or property number itself. As a result customers can receive positive confirmation of a delivery when the item has been fraudulently (or by mistake) delivered to a neighbour. Some eBay buyers are tracking a delivery (having sold an item) to the purchaser’s address, using Photoshop to change the house number on the digital label to another in that  postcode and then sending an empty package. Royal Mail’s system shows it has been delivered (based on its postcode), so eBay processes a refund.

Google has developed its own alphanumeric “plus codes”. These codes work like street addresses and can be used to find or share a place on Google Maps or pinpoint a specific building that doesn’t have street names or numbers. The 11-digit codes are identified by clicking and holding on a location on Google Maps. Plus codes are managed by Google’s Zurich office and are an extension of an existing project – Open Location Code developed as an open-source geospatial project. Plus codes represent areas, and the size of the area depends on the code length. The longer the code, the smaller and more accurate the area. The codes are based on a simple encoding of latitude and longitude. Plus codes can be encoded and decoded offline without any particular infrastructure. 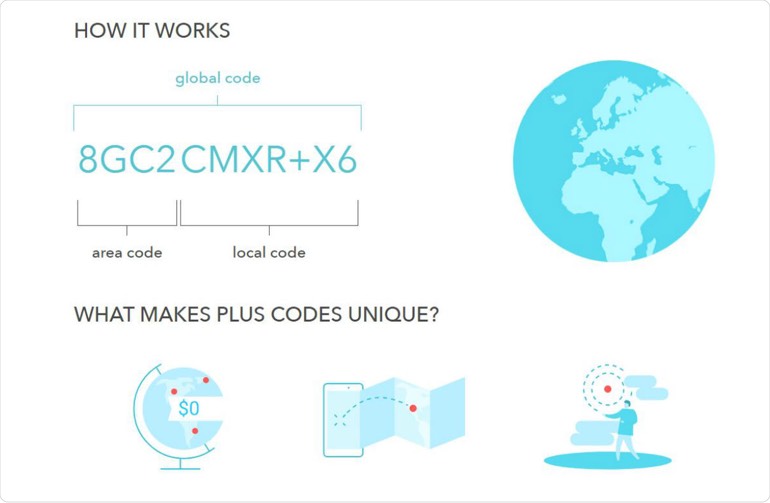 There are a variety of other web-based services that have been created, such as What3Words and Zippr. They provide a code that when entered on their site or used in a URL brings up a web page displaying the location. What3words codes, for example, use three words to represent 3×3 meter squares. Codes are assigned for all locations on earth using a proprietary algorithm with some services charging money either for granting a code, for resolving codes or for allowing users to select their own shortcode.

Some 60 UK emergency services now use What3Words but this isn’t without controversy. As a recent article points out the algorithm used to generate the words is proprietary. Numbers are (mostly) culturally neutral but words are not. Tribes.hurt.stumpy relates to a temple for example. Also each square uses three different words in each of the 37 languages supported by the firm, meaning that each grid square actually has 37 different addresses. As the results of What3Words aren’t shared on a public system, if the firm goes bust there are concerns that the system could be lost or commercially exploited in some way.

What are the use cases?

Given half of the world’s urban population lives on an unnamed street there are evident use cases for various applications including voter registration, coordination of emergency services response, humanitarian relief, transportation and logistics and loan services. What3Words also cites automotive (drivers travelling to new locations), ride-sharing, travel and GIS use cases. Location sharing accurate to 3m x 3m also has an important potential role in future use cases such as on-demand drone deliveries.

With uBook from Leadent Digital you can enable your customers to book and reschedule their appointments via your website, based on the available capacity sourced from your field service management solution.

It uses an intuitive design for easy appointment booking and rescheduling. uBook is fully responsive for all mobile devices and laptops. It is user-friendly with a wide range of configurable options to display information of your choice.

uBook’s core function is to provide easy self-service appointment scheduling as a quick and easy way to deliver excellent customer service. uBook takes demand data direct from your customer and is fully integrated with your systems for a seamless experience. uBook also integrates with What3Words to allow you to identify your booked location.

Why not get in touch to find out how it works!